...Yep, I'm back =)
CORINTH, AL
With the Christmas season in full swing now, one church is definitely NOT singing "Joy to the World." Several months ago the elders of South Bend Presbyterian met to address the issue of some of their members observing the "blasphemous, pagan, wretched holiday of Christmas." While many conservative Presbyterians do indeed observe Christmas, South Bend holds to a strict puritanical view of holidays, not only forbidding any recognition of it in worship, but also strictly insisting that all members "abstain from acknowledging the incarnation from November 27th through January 3rd" of each year. But despite this insistence, the elders have long suspected that some members may still be observing Christmas.
"I could have sworn last year that I smelled fresh pine while talking to one of our deacons," said Ruling Elder Wilson Hovine. "He told me he'd been cutting firewood all afternoon, but I had my doubts."
In a different instance, another elder, Everett Hovine recalled "seeing a youngun with a
peppermint on December 3rd."
Up to this point the elders have not formally caught anyone observing the holiday, but there have been strong suspicions. But this year the elders claim to have come up with a "fool proof method" of knowing what their flock is up to. Working together with the young grandson of Ruling Elder Albert Hovine, the church has developed its own iPhone and Android app to track its members' activities during the "Christmas season."
"They'll be no second guessing this year," said Ruling Elder John Hovine. "Just about every last one of our members uses one of them iPhone or Android phones, and with this new app we can keep track of where they are at all times."
The app works to track the movements of church members 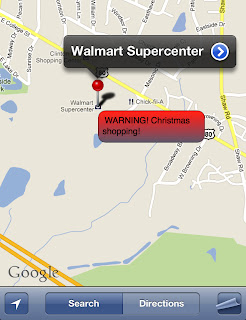 throughout the week, and has been specifically programmed with a special algorithm that can accurately determine whether or not one is Christmas shopping, caroling, or "making merry." In the event of questionable activity, the Ruling Elders are sent an alert, showing the exact location of the member and the nature of the activity in question.
"We are real excited about this," commented pastor Bill Buford. "We feel this will greatly contribute to the peace, joy and holiness of our congregation."
The elders further commented that if the app works well during this year's holiday season that they plan to use it to track members who might attempt to fill up their cars on the Sabbath.
Posted by thbslawson at 5:58 AM

Caught putting a couple of baskets of stuff into her SUV at the store, Maybell Merryweather said, "Honest, Deacon Darnell, these gifts... er... these things are only some supplies I need."

What! Tom in the Box is back? HOOOORAAAAAY!