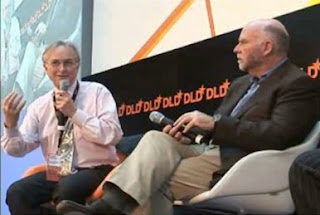 A world gathering of atheists occurred this past weekend in Munich to discuss how the "meaninglessness of atheism is becoming so commercialized."  Led by the outspoken and controversial Richard Dawkins, the group of "intellectuals" and "rationalists" from over 45 different countries listened to lectures and participated in roundtable forums that dealt with the issue.

"Our goal was to encourage one another, and help each other remember the true meaning of life, mainly, that it is meaningless, pointless and short." said Dawkins

In the opening address to the enthusiastic crowd, Dawkins dealt with the issue of the commercialization of atheism.

"What we are currently seeing worldwide is a mass influx of everyday people to atheism, and as a result it's beginning to lose its true hopelessness.  Some of these people are abandoning their beliefs in deity and joining our cause, but at the same time they're bringing in such ideas as hope, optimism, and purpose in life, and this is something that we as faithful unbelievers need to seriously address.  Every effort must be made to reclaim the true meaninglessness of life, to reclaim the great truth of the pointlessness of our existence."

Over the course of the conference the group formulated a motto that they hope will serve as a battle cry for those atheists who want to remember the true misery of life.  "Nothing is the reason for our existence."

At the close of the conference Dawkins noted, "We believe that having a short, pithy statement such as this can help our atheists brothers and sisters out there keep in mind the great truth that all of life has pointlessly come from nothing and is going to nothing."

Posted by thbslawson at 7:51 PM

I've always wondered what atheists would say about the droves of false unbelievers joining their ranks.