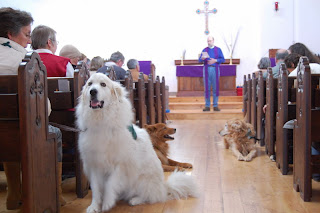 Almost a decade ago, The Healing Place Church of Osburg began adopting a more family-integrated model of doing things.  For them, this meant an end to children's church, and a complete change to their Sunday School schedule.  No longer were children and adults separated into classes, but rather, they began meeting together for a family class.  This philosophy of worship has worked well for the church over the past ten years.  The church has grown from about 15 families to almost 50 on a typical Sunday.  Parents have become more involved in the lives of their children, and other adults in the church interact more regularly with whole families.

"Pets are an important part of a family," said the church's pastor, Jim Rickman, "and if we truly desire to see the whole family together in worship, that's going to include the pets too."

After much debate, the church announced that pets would be welcome in worship.  The first Sunday in November would mark the beginning of a new era for Healing Place.  But things didn't go quite as they had hoped.

"We didn't quite think things through well enough," noted Rickman.  "We had expected a few dogs and cats, but we got more than we bargained for."

The presence of dogs and cats in worship was enough to significantly disturb the service.  Besides the barking and meowing, several chases broke out prior to the prelude.  The call to worship was accented by a "yippy little dog" whose high-pitch bark apparently triggered a seizure in one of the ushers.  And during the first hymn a cat managed to jump on top of the communion table and begin eating the bread.

Besides dogs and cats, several other pets of a more exotic nature caused an uproar.  Even though kept in a terrarium, one young man's pet rattlesnake was enough to send a group of people screaming from the service.  The screams were accented by other shrieks induced by various pet tarantulas, iguanas, and even an aardvark.  The service was forced to an abrupt end whenever several dogs began marking various pews as their territory.

"We went too far," quipped Rickman.  "Thankfully, the repairs to the sanctuary are not as expensive as we first thought, but I think we're going to have a hard time convincing anyone to drink from the communion cups again, especially after that cat used them as a litter box."

Posted by thbslawson at 6:28 PM