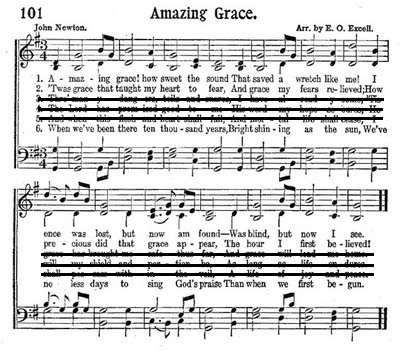 Lifeway Publishing, the official publishing house of the Southern Baptist Convention, announced today the release of a new edition of "The Baptist Hymnal" for 2012.  The hymnal will feature a number of updates and improvements including over 40 new songs, a number of key changes, and extra instrumentation.  In addition, the hymnal will feature most hymns with all but the first and last verses or the first, second and last verses eliminated.

"Most song leaders and music ministers only sing the first and last verses or the first, second and last verses," said Jerry Todd, director of publications for the hymnal.  "To keep people from getting too confused we decided to just save time and go ahead and eliminate them."

Music ministers around the country expressed delight when learning of the new hymnal.

"This will really help," said Larry Moony, a music minister from Macon, Georgia.  "We haven't sung a third verse in over 30 years at our church."
Posted by thbslawson at 10:35 PM

Unfortunately for the publisher, many churches have solved the problem of those pesky unnecessary verses by using projectors. No muss, no fuss.

Hmmm. When will the hymbook you use include all 19 verses of "Immanuel's Land?" (ie. "the sands of time are sinking")

When I was a child our Baptist church pastor would usually end up singing all the verses when singing "Just As I Am" I no one was coming forward that particular Sunday. Sometimes we would even repeat the first verse, if he was unusually persistent.

The hymnal my church uses has all 12 verses of 'Come O Thou Traveller Unknown.'

Meanwhile, reformed baptists dogmatically stick to the Trinity Hymnal, stating, "Unless it takes us an hour to sing through, we'll sing every verse!" Also in the news, Reformed Baptist pastor sets new record for an RB pastor preaching through Romans, only taking 10 years.

HILARIOUS!
(I came here thanks to Stuff Fundies Like)